Some weeks ago, Dver suggested a challenge, to wit:

What if we made September a month of polytheists blogging about their actual practices? No talking about what other people do or should do, no politics unless it’s an integral part of the religious practice described, no controversies, no denouncing, no complaining about how other bloggers make us feel. Just sharing our religious lives, the things we are doing in this month to honor the gods, spirits, ancestors, nature, or whatever.

I immediately liked the notion, but my participation has been at best spotty.  I’ve written three posts this month, and only one was about my actual practices.  On the other hand, I didn’t engage in politicis, controversies, denouncements, or complaining.  September is nearly over, and I’d like to improve my average a bit.

Over Labor Day weekend, I became a priest.

Specifically I became hiereus, a temple priest in service to Poseidon. 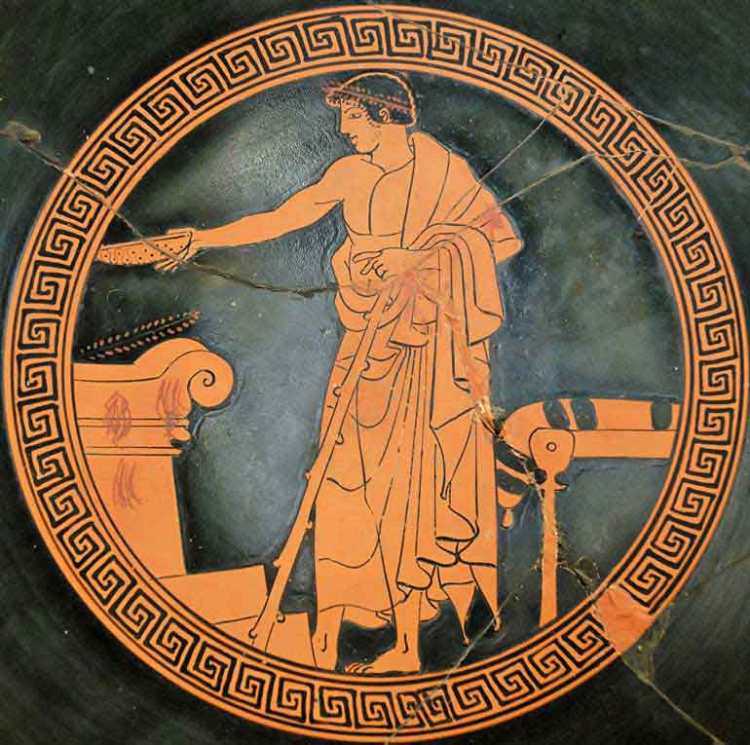 To me, this seems both quite sudden and the culmination of my entire adult life up until now.  It was a year ago next month that Neokoros Timotheos, head of the Hellenic Temple of Apollon Zeus and Pan of which I am a member, broached the subject for the second time.  I had been taken aback the first time he’d suggested I consider it, but this time I found myself agreeing.  That felt fast, given that I’ve only been on this particular path for a half-dozen years.

Looking at it another way, I’ve been on this path since my earliest days growing up — as I have said — close enough to the ocean to smell low tide, but not to be able to see it.  The theoi enticed me with the mythology my parents kept in copious volumes.  On the cusp of adulthood, I became a lector at my Catholic church in an attempt to get closer to something I couldn’t describe.  It wasn’t long after I discovered Paganism that I secretly called myself “priest,” although I didn’t fit any human definition of the word.  As sure as Poseidon answered my call for the Green Man, I was trying to answer a call to be a priest before I was old enough to legally take a drink.  I actually started taking classes at Cherry Hill Seminary when it was still on Cherry Hill, in the Green Mountains of Vermont, but life interrupted that particular attempt.

The weekend retreat at which I took my vows on the head of Zeus and received the purple stole which is reserved for priests in my tradition was a whirlwind of co-instruction, ritual, and contemplation.  Each of the four priests there with me were responsible, as was I, in providing continuing education to one another.  My part included a ritual of purification, and another that I call the blessing of the boats, which was a chthonic ceremony seeking aid from Poseidon’s underworld aspect.

None of what happened during the retreat, I suspect, would have changed my successful evaluation.  The work over the preceding nine months were what counted.  I’d constructed a temple space and built a khoanoam to house the spirit of Poseidon, when he chooses to occupy it.  I learned about basic ritual structure and wrote the ones I led at the retreat.  I read Burkert and modern Pagan theologians, striving to find what role I might fill as Hellenic priest in the 21st century.  Coaching skills, ethical guidelines, and how to apply both divination and other oracular skills as a priest were also covered.

Nevertheless, when during the final ritual Timotheos turned to me and said, “Now, make offerings to the appropriate gods,” or something to that effect, for a moment I was convinced I would screw it up entirely, maybe by pouring a libation to Freya or Jesus.  (Somehow, I managed to figure out who was expecting what from me.)

Right now, I am in what feels like neap tide:  the rituals are complete, but there will be a public ceremony in a few weeks, at which time I will be given a symbolic key to my own temple.  I make offerings as both priest and devotee, and I find myself practicing coaching skills and turning more often to divination, but it’s otherwise quiet.  Not a lot has changed as a result of this work.

It will, though, likely soon after my public installation.  It appears that I am living in interesting times.