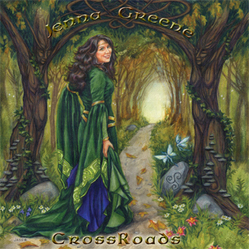 “Celtic” can encompass an incredibly broad swath of music. I got into Silly Wizard when I was in college, but when I told my mother I enjoyed Celtic music, she made me a recording of what was broadcast on her favorite radio station one St. Patrick’s Day. Turns out I’m not quite as excited by “50 shades of Danny Boy” than I am with “Lover’s Heart.”

Jenna Greene’s album Crossroads puts the emphasis on the fairy parts of Celtic culture. That’s not surprising, given that it’s not unusual for her to appear wearing wings. And medieval garb. In fact, I get the impression one might encounter her in a grocery store dressed like that.

Greene’s music has an ethereal quality, evocative perhaps of Enya, but less with the haunting and more with the blessing. The album’s title is inspired by the many Celtic stories of crossroads as a liminal place where magic happens. (These tales are in no way unique to Celtic lore, which emphasizes their importance. Crossroads are a thing.) Her description in the liner notes of the Celtic theme of a wanderer passing into the spirit realm at such an intersection reminds me of nothing more than shamanic journeying. Listening to these selections with that in mind, I can hear an echo of the transformation which befalls such travelers.

Particularly pleasing to me is “Herne,” because I’ll always have a special place in my heart for that horned god. It was his magic that helped awaken my Pagan soul as I grew to manhood, after all. I may have eventually committed to a very different deity, but I will never forget my roots.

As roots go, Greene shows a few of hers with the quotes she includes. They come from Robert Frost, Joseph Campbell, and the movie “Practical Magic.” It would be unfair for me to reveal which quotes these are; that could well be a reason for buying a copy.

What does this music sound like? It’s light. It’s airy. It’s ethereal. If a deep root note is your cup of tea, you may feel a bit lost at these crossroads, but let me instead recommend that you try another way. Many of us use low notes as a reference point, a road map of sorts; I certainly do. It’s reassuring, but that style of listening relies on grounding by giving up the opportunity to fly.